Fantasy Portrait of Our Dejected Hero 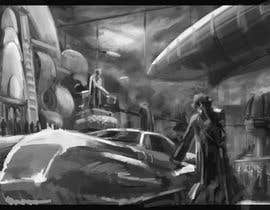 DETAILS: Depict a 24 – 26 year old adventurer who has been rejected by a potential employer. He is outside a large building downtown, in a dirty city, dejected, smoking beside his treasured possession: a fantasy version the C3 Corvette.

HOW TO APPLY:
You will NOT submit your final entry. Instead, you will submit a sketch of what you WILL draw and a link to your portfolio. If you are chosen as the winner, you will produce the proposed art.

BACKGROUND:
Your artwork is actually illustrating a real business re-imagined as an adventure taking place in the 1970’s.

CONTEXT:
Imagine that the main character has just finished pitching his idea to travel to a remote island where the local population blames the constant storms on a sea monster. Unfortunately, our hero was turned down by the rich old man he was trying to convince.

BACKSTORY:
Our hero was once a promising medical student. However, he was expelled for unruly and unprofessional behavior. Now he works for a rental company as a property manager. To turn his life around, he has spent the last 3 years learning about an old man and his obsession with finding a mythical creature known as Leviathan. Now, that old man has rejected him and he is depressed, dejected, and wondering what to do next.

ABOUT THE FANTASY WORLD:
(Read the full description in the attached document: A_Real_Life_Business_Adventure_Full Description.docx)
This fantasy world is set in the 1970's where WW1/2 didn't occur. There is no large scale international wars but injustice is still rampant. This is no utopia. It is a complex world of good and bad. No large wars meant early globalization and economic growth is constant. The world population has soared. Slums are common and there is large wealth inequality. In this fantasy world, nuclear power has never been developed. Without it, the world is entirely dependent on oil. In this alternate universe, a very rich, very influential man, one of the worlds “ruling” elites, has slowly become demented after suffering a stroke leaving him partially unable to speak and largely immobile. In this paranoid state, he would have been forgotten except that, with his money, he is perpetually funding innumerable expeditions to far flung corners of the earth to locate relics, confirm historical details, find eye witnesses, document findings, confirm suspicions, etc., etc. He is obsessed with finding the Biblical monster Leviathan which he believes will destroy the world. Though demented and ridiculed, the old man always pays. He is always being approached by adventurers.

WHY:
I love entrepreneurship and not just for the promise of money. If not money, then what else? Because envisioning a business and then taking it from nothing to something, is to me a grand adventure. To augment the adventure, something I often do is make up a story that plays out in parallel universe to whatever it is I'm trying to accomplish in the real world. You are drawing that story.

“True artist. Will do it even if no one pays him. Of course, that's why people like me pay him! ”